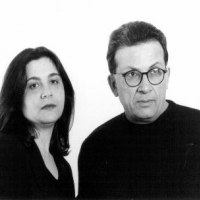 CANNATÀ & FERNANDES arquitectos Lda was founded in 2000 by FÁTIMA FERNANDES and MICHELE CANNATÀ. They have been working together since 1984, developing professional activity both in Portugal and Italy. They are the Scientific Coordinators of Architectural events at CONCRETA - EXPONOR since 1999. In 2003 they became the Scientific Coordinators in charge of ASA editions Architecture Department  and, in 2004 the scientific coordinators of the Architecture Department of CIVILIZAÇÃO editions.

Their works and projects have been presented in various individual and collective exhibitions, among which the Venice Biennial in 1996, and the Milan Triennial in 1997.

They have been invited by universities and cultural institutions to talk about their projects and to participate, while teachers, in several international seminar projects.

The office occupies a long narrowed lot, which is a characteristic of Oporto's urban mesh.  There used to be a house and an old factory now reconverted in the office. It is localized in the urban center of Porto in the Northern Coast of Portugal.

1979-1986. Studies in Escola Superior de Belas Artes do Porto where she graduates in Architecture.
1984. Does her traineeship in Italy, guided by prof. Arch. Manuel Mendes.
1990-1992. Becomes the Architect in charge of the Department for the Support of the Historic Center of Miranda do Douro.
Since 1996. Teacher of the Architecture Section (Architecture V) in Escola Superior Artística do Porto. ESAP.
2003. Begins her PhD attending the Escola Técnica Superior de Arquitectura da Universidade de Madrid.

1971-1977. Studies in Istituto Universitario Statale di Architettura di Reggio Calabria where he graduates in Architecture.
1978-1982. Works in Polistena City Hall, Italy, as principal architect.
1982. Attends "La Rinascita della Città" High Course in Bolonha, Italy.
1983-1984. Becomes assistant in the Faculty of Architecture of Reggio Calabria, Italy.
1993. Obtains the equivalence of his Academic title in the Faculty of Architecture of the University of Porto.
Since 1997. Teacher of the Architecture Section (Architecture IV) in Escola Superior Artística do Porto. ESAP.
2009. Doctorate in "Composizione Architettonica e Progettazione Urbana" in the University of Chieti-Pescara Italy, department  IDEA. Infrastrutture, Design, Engeneering Architecture.