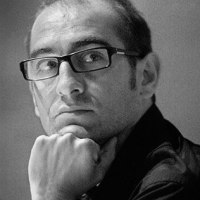 Christophe Hutin’s career began – politically and poetically speaking – in Johannesburg in 1994, just after Nelson Mandela was elected : he spent a year in Soweto, where he worked with the ANC (African National Congress). When he returned to France he decided to become an architect.

In 2003, shortly after graduating, he set up Christophe Hutin architecture with Nicolas Hubrecht and Vincent Puyoô. In 2004 he received a research grant from the AFAA (Association Française d’Action Artistique) that enabled him to return to Soweto to investigate housing initiatives ten years after the advent of democracy and the implementation of policies by Mandela and the ANC.
Christophe Hutin has presented his work on a number of occasions : an exhibition entitled "Rétrospective Perspectives, le Grand Parc", with Anne Lacaton, Jean-Philippe Vassal and Frédéric Druot, 2013 / in the framework of the "50,000 logements", with Anne Lacaton, Jean-Philippe Vassal and Frédéric Druot, 2012 / as part of the call for ideas entitled "Création architecturale et innovation urbaine dans le centre historique de Bordeaux", 2007 / as part of the exhibition "Histoire de maisons", 2006 / and a video/photo installation entitled "Township".

As part of the exhibition entitled "Est/Ouest-Nord/Sud #3", 2005. An exhibition was presented in 2009 entitled: "Construire librement, l’enseignement de Soweto".