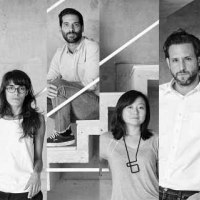 METRO. Founded in 2000 in São Paulo, METRO works in different scales, from temporary installations to urban interventions. The work allies a modernist architectural tradition, resulting from the frequent collaboration with the architect Paulo Mendes da Rocha [Pritzker Prize 2006], to a practice which complies with contemporary issues. On the one hand, we look after an architecture in which material organization serves the public use of the built spaces; on the other, we look upon the importance of formal speculation and research on materials, besides an approach that tries to recognize and bring solutions to the necessities and desires of the wide network of agents involved in the production of space.
MARTIN CORULLON. Trained as an Architect at The Faculty of Architecture and Urbanism at The University of São Paulo [FAUUSP]. Holds a Masters degree from the same institution. Founded METRO ARQUITETOS ASSOCIADOS in 2000. Since 1994 has been a close collaborator of Paulo Mendes da Rocha. During 2008 and 2009 he worked at Foster+Partners in London.

GUSTAVO CEDRONI. Founder. Qualified as an Architect at FAAP in 2000. Worked with Pedro Paulo de Melo Saraiva in 1999, and with Eduardo Colonelli in 2000. Became a collaborator at METRO ARQUITETOS ASSOCIADOS, and partner in 2007. Participated in the Architecture Biennale of Venice with a video installation in 2006 and taught at the European Institute of Design in São Paulo during 2010. In 2012, he worked with Rem Koolhaas's OMA in NY.

HELENA CAVALHEIRO Graduated as Architect and Urbanist by the Federal University of Rio Grande Do Sul at Porto Alegre in 2008, joining METRO in 2012; becoming an associate in 2016. Previous experiences include the design and delivery of the architectural and exhibition project for Mercosul’s 8th Biennial of Visual Arts in 2011.

MARINA IOSHII Trained as an Architect at the Faculty of Architecture and Urbanism at the University of São Paulo, working in the office of METRO since 2010. Previously worked for The Curitiba Institute of Urban Planning & Research [IPPUC] and at Arquispace Projetos & Obras, in Curitiba.