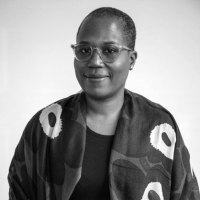 Shantel Blakely holds an MArch from Princeton University, a PhD in the history and theory of architecture from Columbia University, and is currently completing an MA in Philosophy at Tufts University. She has taught courses in architectural theory and urban design at Columbia, Barnard College, and Parsons The New School of Design; most recently, she managed the public lectures and conferences program at Harvard GSD. As an independent critic and scholar, she has probed the relationship of architecture and design to ideologies of experiential practice. Her writings have appeared in PLOT, Log, AA Files, Avery Review, and Open Letters, and she has participated in a variety of exhibitions and symposia as an essayist, speaker, and advisor.

With this fellowship, Blakely returns to an intellectual project that begins with meditations on art and philosophy. The premise that "Art is both an individual good and an instrument of education,” articulated by early-20th-century English poet-educator-anarchist Herbert Read, informed a number of claims which intensified in postwar Europe, that aesthetic experiences could confront social problems. Blakely will use her London residency to study Read’s life, ideas, and intellectual milieu, with the aim of tying his ideas to those of others (including John Dewey and Charles Eames) who regarded art, as well as architecture and design, as a means to achieve social harmony.