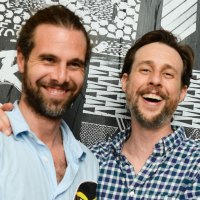 Created in 1999 and based in Brooklyn, FAILE is the artistic partnership of Patrick McNeil (b. 1975) and Patrick Miller (b. 1976). The duo were also associated with the Japanese artist Aiko Nakagawa (Tokyo, b. 1975) until 2006. The artistic duo are Known for their post-punk pop aesthetic of pulp images, which they glue, paint and print in a variety of media and installations. FAILE are largely influenced by the artists of the sixties such as Lichtenstein, Basquiat and Rauschenberg but also by pop culture, comic books and nostalgic imagery in general.

The work is a critique of consumerism whilst it feeds itself on it. It also addresses religious themes and the influence of the media.

They have accumulated many successful collaborations, particularly in the the worlds of fashion and the music- from New York to Ulan Bator via Manilla, London or Lisbon, FAILE’s work occupies public spaces and is shown in international institutions such as the Tate Modern in 2008, the Dallas Contemporary and the New York City Ballet in 2013. The Brooklyn Museum Devoted a retrospective to their work in 2015.