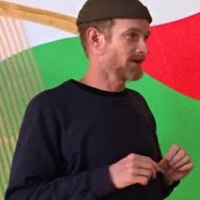 Born in 1974 in San Francisco, MOMO works primarily in the area of public art.

The aesthetic ideas he develops in his artistic work are abstract, sleek, post-digital and are applied to the flat plane of walls as well as the three-dimensional installations he creates. The resultant graphic work has strong, vivid features- composed of clean lines and pure and primary colors.

These large-scale works have formed the bedrock of his artistic career and have taken him on an endless journey around the world. Even though he was based in New York for six years, and his studio and team are based in New Orleans, MOMO is a real globetrotter. You can find his murals and installations in various cities and countries such as Manhattan, Boston and Philadelphia but also in the South of Italy, France, Belgium, the Caribbean and Mexico.

In 2008 Rojo editions published his first monograph 3 AM-6AM and in 2012 Studio Cromie published his second one entitled in 74 Pieces.