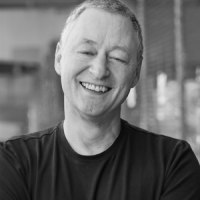 Eduard Hueber was born in Vienna, Austria and studied architecture at the ETH in Zurich, and upon graduating, pursued a triple career in practicing, teaching and photographing architecture. After having taught at the ETH in Zurich, Switzerland, Eduard moved to the United States to teach at Syracuse University School of Architecture in Syracuse, NY, where he met Simon Ungers. After two years at Syracuse, Simon and Eduard accepted positions at the School of Architecture at Rensselaer Polytechnic Institute in Troy, NY. Eventually, the differences in the approaches of teaching architecture between the existing faculty and the newcomers resulted in the contracts not being renewed. Both Simon Ungers and Eduard Hueber moved to New York City, where Simon concentrated on art and architecture. Eduard concentrated on architectural photography, where his intimate knowledge of architecture and the building process gained him success both in USA as well as in Europe.

In 2004, Paúl Rivera joined Archphoto as a partner, and in 2006, Ines Leong joined the team as director of digital imaging. In 2010, Andrew Rugge joined to help with all aspects of the tasks at hand. As a team, they have developed approaches and technologies in order to deal with the intricacies of taking pictures within the canyons of New York City, which gives them numerous advantages in other locations. Together, their images have been published and seen in all relevant publications worldwide.

Eduard still enjoys bridging all continents and photographing around the world, and is always grateful to come home to New York City.