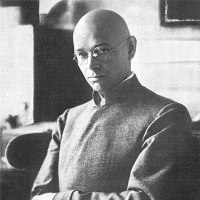 Johannes Itten (Switzerland, 1888 - Switzerland, 1967). He was a painter, designer, teacher and writer. Between 1904 and 1906, Johannes Itten was trained as a primary teacher at the Teacher Training Institute in Bern. He worked as a primary school teacher from 1908 to 1909. That same year, he enrolled at the École des Beaux-Arts in Geneva and studied there until 1910. Until 1912, Itten completed another degree in natural sciences and mathematics at the University of Bern and He received his diploma as a high school teacher. In the following two years, he studied at the Stuttgart Academy and became a member of the main student study of Adolf Hölzel. In 1916, Herwarth Walden organized a first individual exhibition dedicated to the work of Itten in his gallery Der Sturm in Berlin. That same year, Itten moved to Vienna and opened a private art school there.

Between 1919 and 1923 he was named one of the first masters of the Bauhaus in Weimar by Walter Gropius. In addition until 1923 he was also director of the preliminary course that he had developed independently for the introductory semester and teacher of the form of all the workshops, except the workshops of ceramics, binding and printing. He left the Bauhaus in March 1923 after disagreements with Walter Gropius and three years later founded the Itten School in Berlin.

In 1932, he was elected to direct Höhere Fachschule für Textile Flächenkunst (Advanced School of Textile Art) in Krefeld. In 1934, the Itten school in Berlin was closed by the NSDAP. In 1937, Itten's work was exhibited at the exhibition Entartete Kunst (degenerate art) in Munich. In the following year, he was dismissed from his position at the academy in Krefeld. Itten then moved to the Netherlands. In 1938, he became the director of the Kunstgewerbeschule (school of applied arts) and the Kunstgewerbemuseum (museum of applied arts) in Zurich. In 1943, he also became director of the Textilfachschule (textile school) in Zurich. In 1949, he was commissioned to design the Rietberg Museum for non-European art in Zurich. In 1955, Max Bill invited him to join the School of Design (HfG) of Ulm. Several retrospectives of his work were carried out at the Stedelijk Museum in Amsterdam in 1957 and at the Kunsthaus Zürich in 1964, among others.

The Darmstadt Professor awarded Johannes Itten an honorary doctorate in 1965. In 1966 he received the "Sikkens Art Prize of the Netherlands" and is now internationally recognized for representing Switzerland at the 33rd Venice Biennial.