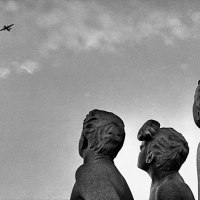 His professional career began in 1999 upon receiving the photography award from Spanish gallerist Juana de Aizpuru, and showing his work in international photography fairs such as  ARCO and ParisPhoto. In 2004, he receives the research grant Ruy de Clavijo from the Casa Asia program of the Ministry of Foreign Affairs of Spain to carry out a project in Uzbekistan. This work resulted in the publication of the book Tower of Silence in 2008. He also published the book Maestranza, a photographic report about the bullring of Seville. This work was exhibited in large format in the facade of the FNAC building in Seville. In 2010, he participated in the OjodePez Photo Meeting Barcelona. He has published in magazines such as NewsWeek, Financial Times, Ojo de Pez or Vokrug Sveta. In 2012, he published the book Ronda Goyesca edited by La Fábrica. He was a nominee of the Magnum Foundation Emergency Fund Grant in 2012.

In 2013, Aitor Lara carried out an assignment by Save the Children to document the situation of Children in Poverty in Spain. He also received the Endesa Grant to carry out the project Dragoman.