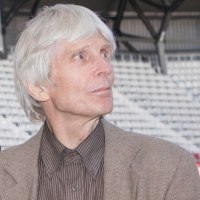 Max Peintner. (b. 1937, in Hall in Tirol, Austria) Max Peintner lives and works in Vienna. He studied civil engineering at the Technical College of Vienna as well as architecture at the Academy of Fine Arts in Vienna. In 1964 he published together with Heinz Geretsegger the monography «Otto Wagner 1841–1918, unbegrenzte Großstadt, Beginn der modernen Architektur» (Residenz Verlag). In 1969 he published his first drawings with the title "Contributions to the Future. Critics of Technology and Civilisation under the Guise of Utopia". In 1972 some of Peintner's works were exposed in the art gallery of Baden-Baden. In 1977 the documenta 6 showed some of his works. In 1986 he represented Austria at the Biennale di Venezia together with Karl Pranti.

Peintner’s works have been shown in different solo and group exhibitions such as in the Staatsgalerie Stuttgart (1982), in the Rupertinum in Salzburg (1985/1986), in the Museion in Bozen (1989) and in the Ludwig Kortárs Múvészeti Múzeum in Budapest (1996/1997).

The Neue Galerie in Graz dedicated a retrospective to him in 2000. One of Peintner’s pencil drawings from 1974 is in the collection of the Museum of Modern Arts in New York.