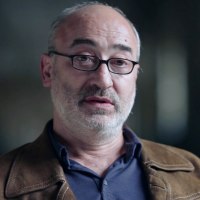 Pep Agut studied at the Faculty of Fine Arts of Sant Jordi in Barcelona where he received his bachelor's degree (1979-84) and his doctorate (2018). He has lived and worked in various European cities. His artistic practice, sometimes framed in the post-conceptualism of the 90s in Spain, reflects largely on the role of the artist, the problem of representation and the place of art. He manifests a critical position with respect to authorship and the world of art, understood as the product of a society burdened by its spectacularization and in which the work of art is reduced to mere economic merchandise.

His projects and works, in which he uses different media and techniques, are the result of long and intense research processes whose main objective is to return to art its dimension of timeless public space where narrative and text usually emerge as factors inherent to the same plastic; the artist himself acknowledges feeling more permeable to writers such as Maurice Blanchot or Emmanuel Lévinas than to contemporary artists. Throughout his career, he has coordinated and participated in numerous seminars, conferences, and debates on art. His work has been present at the XLV Biennale di Venezia (1993), Prospekt (1996) or the XI Biennale de Sidney (1998), and he has shown his work individually and collectively in institutions such as the Tel Aviv Museum of Art (1993 ) or the MACBA in Barcelona, ​​which dedicated a retrospective to him in 2000.