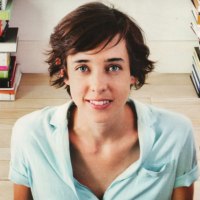 Elena Alonso (Madrid, 1981). Graduated with a degree in Fine Art from the Complutense University of Madrid or UCM (2006). While still a student, she received grants that permitted her to round out her education at the Royal Institute of Art (Stockholm, 2004) and the University of Vigo (Pontevedra, 2005-2006). After graduation, she travelled to Helsinki to study at the Kuvataldeaketemia (2007) and later completed a master’s degree in Art, Creation and Research in Madrid (UCM, 2010).

The primary focus of her work is drawing, which she interrelates with other disciplines such as architecture, handicraft and design, paying particular attention to issues related to affectivity with the environment.

Her work has been featured in solo exhibitions at Espacio Valverde (Composición de lugar, 2014; La tapadera, 2012); at the Sala de Arte Joven, as part of the programme 9, un proyecto sobre dibujo contemporáneo (2011); at A.C. Mediodía Chica (Condiciones y efectos personales, 2010); and at the Cable Factory in Helsinki (Paredes de piel, 2007).

She has recently been awarded several distinctions and grants. In addition to earning an honourable mention in the XIX Gregorio Prieto Drawing Competition (2009) and coming in as a finalist for the ABC Drawing Award (JustMad2, 2011), she also received a Contemporary Creation Grant from Matadero Madrid to produce the project Objeto de duda (2011) and was awarded in the 23rd Circuitos de Artes Plásticas (2012) and Generaciones 2013.

She currently lives and works in Madrid.