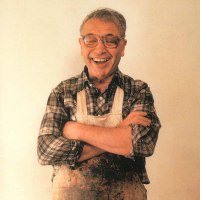 Julio Alpuy was born on January 27, 1919 in Cerro Chato in the department of Tacuarembó (Uruguay), and resided in New York since December 1961, until his death on April 5, 2009, at the age of 90. Uruguayan painter, sculptor, and muralist. During his early career, Alpuy was a part of the Taller Torres-García (School of the South) and the constructive art movement. While his early works were greatly influenced by Torres-García's theories about what he called Constructive Universalism, Alpuy  was an original creator of wooden pieces and reliefs in a language of his own.

At the age of sixteen, Alpuy was sent to Montevideo to continue his education. However, to pay for school he worked during the day and went to night classes. While in Montevideo, Alpuy became friends with members of the Libertarian Youth (Juventudes Libertarias). Alpuy attributes these years in association with the Juventudes Libertarias to have helped further his understanding of freedom, justice, and respect. During these early years, Alpuy had little to no interaction with art.

In 1939, Alpuy walked into an exhibition of José Cúneo's watercolors. Shortly after, Víctor Bachetta, a member of the Association of Constructive Art, connected Alpuy with Joaquín Torres-Garcia. Alpuy  joined the Taller Torres-García in 1940 and began taking the classes given by Joaquín Torres García (1874–1949) in 1940, before the creation of the Torres García Studio, and became one of the most devoted, unconditional and loyal followers of the Master in those classes held at Calle Abayubá in Montevideo.

After Torres García's death in 1949, Alpuy began traveling around Latin America, Europe, and the Middle East, from 1951 to 1953. These travels provided new materials and ideas for Alpuy, as well as induced him to many new artist and thinkers. In between his travels abroad, Alpuy taught drawing at the Taller Torres-García until 1955. His students include José Collell, Walter Deliotti, and Mario Lorieto. During this time, Alpuy produced an extensive series of works within the language of Constructive Universalism.

He was fascinated by the city and began painting New York scenes, creating several works with that theme. The 1970s were a particularly fertile stage for Alpuy. It was a golden age in his career and he created, especially from 1962 to 1969, a noteworthy series of reliefs that are among the most outstanding pieces in his production. They speak to a primeval world, genesis, the earth, the universal couple, the cosmos, and love of nature.

As of 1969 the artist began approaching his themes differently, especially in the reliefs: he softened the shapes, and his palette, and progressively increased figurative representation. It is a more explicit and narrative painting, more suggestive, in which themes are very clear. Woman, a theme he had approached abstractly earlier, is now very explicit, both in his paintings and in his drawings and watercolors, and fundamentally in the series of recumbent female nudes (1975) and a series of portraits and nudes from the 1980s.

In the 1970s he created a very interesting series of engravings, encouraged by Luis Solari, who was then residing for long periods in the United States and who had been a friend of his since the 1950s. In this process the technical help of Glauco Cappozzoli and the contacts with Raúl Pavlotzky, both profoundly familiar with the language of printmaking, were important. Alpuy also did an excellent series of temperas in 1972. The prints and temperas are among his most outstanding work from this period.