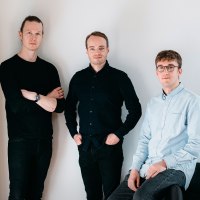 AOR Architects, founded in 2015 by Erkko Aarti, Arto Ollila and Mikki Ristola, today AOR Architects employs ten designers. Among the office’s ongoing projects are two new school buildings: Tuusula High School and Community Centre, the world's largest massive timber log school based on a 2018 competition win and to be completed in 2021, and XAMK – South-Eastern Finland University of Applied Sciences estimated for 2023. A competition win that generated much international interest in 2017 is the extension to Tampere Art Museum, which is now in the design stage for realisation.

In addition to the numerous competition wins and prizes in Finland, Erkko, Arto and Mikki have had success in international competitions. As a consequence, the first realised project of the trio was the Viewpoint Pavilion in London, constructed in the Camley Street Natural Park in 2014. AOR’s design for a new visitor centre at the UNESCO World Heritage Site of Petäjävesi Old Church has been awarded the Finnish Association of Architects’ Wuorio prize as well as a Commendation in the Silver Medal Category of RIBA President’s Medals 2016. Together with the Nordic Works Collective of young architecture practices, AOR was awarded the 2016 Pietilä Prize for special achievement in reforming architecture.