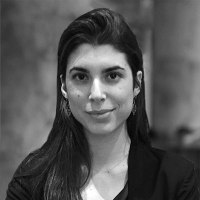 Xristina Argyros is an architect, urban designer, teacher, and writer. She received her Masters degree in the spring of 2013 from the Yale University School of Architecture after earning her Bachelor of Arts and Architecture degree from Princeton University in 2009. Argyros is the co-founding partner of NEIHEISER ARGYROS, a London based architecture practice with projects in Europe and the United States of America. Prior to this, she worked at a number of award winning firms, including the Office for Metropolitan Architecture (OMA) in New York City, Ateliers Jean Nouvel in Paris, and WORKac in New York City. Argyros has taught at Yale University, the Welsh School of Architecture at Cardiff University, and has been teaching a design studio at the Architectural Association in London since 2016. She is a licensed architect in Greece.

Xristina Argyros and Ryan Neiheiser are currently editing a book titled “The School of Athens” which more specifically examines Athens and the possible role academic institutions can have in reinvigorating and reshaping the city.