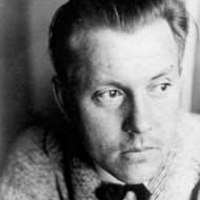 Alfred Arndt (Prussia, Germany, 1898 - Darmstadt, Germany, 1976). Architect, student and teacher of the Bauhaus. He was recruited in the First World War and in 1916 he worked as a foreman in Gdansk. From 1919 to 1920, he attended the trade school in Elbing and studied at the Academy of Art in Königsberg. At the same time, he had classes with the painter Robert Königsberg. In 1921, Arndt joined Wandervogel, a German youth movement oriented towards nature.

He began his career at the Bauhaus in Weimar, in the preliminary course given by Johannes Itten and later, he received classes from Paul Klee, Wassily Kandinsky and Oskar Schlemmer. From 1922 to 1926, he studied in the mural painting department of Wassily Kandinsky and Hinnerk Scheper. Between 1926 and 1927, he attended the carpentry workshop taught by Marcel Breuer.

In 1927 he married the photographer and also student of the Bauhaus, Getrud Arndt and they moved to Probstzella, where he commissioned the "Casa del Pueblo".

In 1929, he returned to the Bauhaus at the invitation of Hannes Meyer to take over the direction of the carpentry workshop. In 1932, the Bauhaus closed due to the Second World War, so Alfred Arndt returned to Probstzella, where he joined the Nazi party and was head of publicity. Between 1945 and 1947 he worked as municipal councilor for construction in Jena, but in 1948 the family moved permanently to Darmstadt, in the new Federal Republic of Germany.