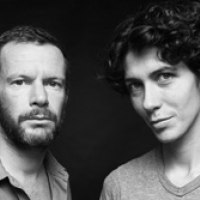 ATELIER 37.2 is the result of an encounter between Italian architect, Francesca Bonesio and French photographer / art director, Nicolas Guiraud. It is a micro-architecture studio whose production and resarch are centred on the relational and narrative potential of space. 37.2 develops: Small-scale architecture projects for any kind of scene (private, public, individual, collective, social, spiritual) and spatial installations more specifically designed for artistic and cultural institutions as well as for the public space.

Francesca Bonesio was born in 1976 in Torino, Italy. She has an M.A. in Architecture (2001) and a P.h.D. (2007) in Architectural Restoration from the Politecnico of Turin, where she teaches as studio assistant on the faculty of architecture. Between 2001 and 2008, she worked for different architectural studios in Turin and in Paris.

Nicolas Guiraud was born in 1970 in Bayonne, France. He graduated with a degree in Economics and Philosophy. He worked with Magnum Photos between 1995 and 2007, where he becomed Creative Director in 2000. He founded two reviews for Magnum Photos : "M" and "Fashion magazine". Since 2001 he combines Photography (Documentary and Fine art) and Art Direction. He has exhibited his photographic work at the Arles Photos Festival, the Palais de Tokyo and Colette. He published "50 0fficial Portraits", a book about homeless people shot in studio in Paris.