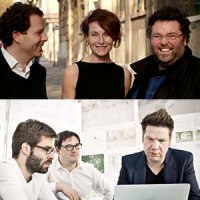 AWP is an interdisciplinary architectural office for territorial reconfiguration and design and one of the creative leading practices in France. Made up of Marc Armengaud, Matthias Armengaud, Alessandra Cianchetta, it is based in Paris and Basel (AWP-HHF) and develops projects internationally working on a wide variety of programmes: architecture, landscape design, strategic planning, urbanism ranging from major large scale public projects to temporary installations both in France and internationally. The practice was awarded the French Ministry of Culture’s Prize for Best Young Architects in 2006, and the French Ministry of Transport, Housing and Ecology’s PJU urban planning award 2010.

AWP is currently working on the strategic masterplan plan for the development of urban space in the La Défense business district, and designing an iconic 800 m long public space just below the Grande Arche de la Défense, as well as a series of follies and buildings, of culture & leisure.

HHF Architects was founded in 2003 by Tilo Herlach, Simon Hartmann and Simon Frommenwiler. Since then, HHF Architects have realized numerous projects in Switzerland, Germany, China, France, Mexico and the USA. The scope of work ranges from urbanism and large-scale construction to public pavilions and interior design.

In addition to building, teaching is an important activity of the office. The principals of HHF were visiting professors at the University of Innsbruck and guest lecturers at the UIA in Mexico City and at MIT in Boston. They participated also as jury members at numerous universities. From 2009 – 2011 Simon Hartmann was professor at the HTA in Fribourg, Switzerland. Since 2011 he is professor at the Joint Master of Architecture in Fribourg. 2014 he is teaching as a deputy professor at the University of Karlsruhe. Simon Frommenwiler was a visiting professor from 2011 – 2013 at ENSA Strasbourg, where he is an associate professor since 2013. 2014 he is teaching as a lecturer at MIT in Boston.