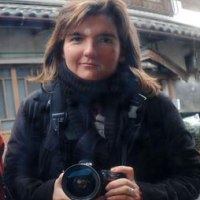 Tina Bagué (Barcelona, Spain 1974) since 1998 she works as a freelance photographer for various publications. Shortly thereafter, she also began to travel around the world with her camera. For the last nine years, she has traveled more than 20 countries, producing travel reportages that have appeared in many magazines such as El País Semanal, Condé Nast Traveler, Lonely Planet Magazine, etc. Since 2002 she is also the editor in chief of Digitalfoto published in Spain. Currently she works in color and digital.