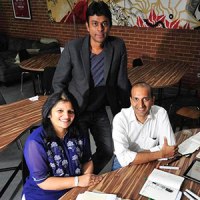 billionBricks is a Singapore based non-profit design and innovation studio providing shelter and infrastructure solutions for the homeless and vulnerable. It was started by Prasoon Kumar, who had been an architect for 13 years before quitting his job to helm the organisation full-time as CEO. He noticed the dismal quality of housing designed for the poor in developing countries in the region. There was a lack of competition for such projects, therefore, there was no demand for accountability and quality. Noone, not even the homeless, would want to live in them. They would rather live in the streets or the slums. This drove Prasoon to set up billionBricks.
Anurag Strivastava, CEO of architecture firm Space Matrix, and Snehal Mantri, a property developer in India, later joined Prasoon as the organisation's founding trustees. Anurag, who comes from a humble background understands how the safety of a roof provides a person with the confidence to dream, as well as access to opportunities for economic improvements. The trio based billionBricks in Singapore because of its status as a design and innovation hub, and proximity to funders. The location was also ideal to manage its regional projects that are today in India, Cambodia, India, Malaysia and Nepal.
Their winterHYDE has been awarded the Iron A' Design Award in the category of Social Design in 2016 by the grand jury panel of the A’ Design Award & Competition which consists of internationally influential press members, established designers, leading academics and prominent entrepreneurs.