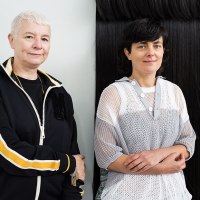 Pauline Boudry (Switzerland, 1972) and Renate Lorenz (Germany, 1963) have been working together in Berlin since 2007. They produce objects and installations that choreograph the tension between visibility and opacity. Their films capture performances in front of the camera, upsetting normative historical narratives and conventions of spectatorship, as figures and actions across time are staged, layered and re-imagined. Their work has been exhibited around the world, at venues such as the MoMA, Palais de Tokyo, NBK Berlin and the Centre d’Art Contemporain Genève. In 2019, the duo presented the installation Moving Backwards at the Swiss Pavillion of the 58th Venice Biennale. For IFFR 2021, Boudry and Lorenz, honoured with a Short Profile, created the performance (No) Time.