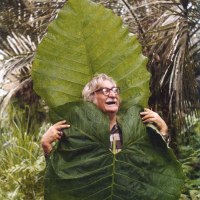 Roberto Burle Marx (born in São Paulo, Brazil, August 4, 1909 – Rio de Janeiro, Brazil, June 4, 1994) He was a fundamental figure in modern art and the garden movement in Latin America during the second half of the 20th century. His powerful modern vision produced thousands of gardens and landscapes, including the famous mosaic curved walkways on Rio's Copacabana Beach. He was the fourth son of Rebecca Cecília Burle, a member of the traditional Pernambuco family of French ancestry, Burle Dubeux, and Wilhelm Marx, a German Jew born in Stuttgart and raised in Trier. The family moved to Rio de Janeiro in 1913.

Burle Marx's first landscaping inspirations came while studying painting in Germany, where he often visited the Botanical Garden in Berlin and first learned about Brazil's native flora. Upon returning to Brazil in 1930, he began collecting plants in and around his home. He went to school at the National School of Fine Arts in Rio in 1930 where he focused on visual arts under Leo Putz and Candido Portinari. While in school he associated with several of Brazil's future leaders in architecture and botanists who continued to be of significant influence in his personal and professional life. One of these was his professor, Brazilian Modernism's Lucio Costa, the architect and planner who lived down the street from Burle.

In 1932, Burle Marx designed his first landscape for a private residence by the architects Lucio Costa and Gregori Warchavchik. This project, the Schwartz house was the beginning of a collaboration with Costa which was enriched later by Oscar Niemeyer who designed the Brazilian Pavilion at the New York World's Fair in 1939. Niemeyer also designed the Pampulha complex in 1942 for which Marx designed gardens. His first garden design was completed in 1933. In 1937, Burle Marx gained international recognition and admiration for this abstract design of a roof garden for the Ministry of Education building.

In 1949 he acquired the Sítio de Santo Antonio da Bica, a 365,000m² estate in the Barra de Guaratiba neighborhood on the outskirts of Rio de Janeiro. Burle Marx began taking expeditions into the Brazilian rain forest with botanists, landscape architects, architects and other researchers to gather plant specimens. He learned to practice studying plants in situ from the botanist Henrique Lahmeyer de Mello Barreto and established his garden, nursery and tropical plant collection at Guaratiba. This property was donated to the Brazilian government in 1985 and became a national monument. Now called Sítio Roberto Burle Marx, under the direction of IPHAN-Instituto do Patrimônio Histórico e Artístico Nacional / Ministério da Cultura, it houses over 3,500 species of plants. The house was rebuilt in a valley on the site of a garden house belonging to the original plantation estate.

Roberto Burle Marx founded a landscape studio in 1955 and in the same year he founded a landscape company, called Burle Marx & Cia. Ltda. He opened an office in Caracas, Venezuela in 1956 and started working with architects Jose Tabacow and Haruyoshi Ono in 1968. Marx worked on commissions thorough out Brazil, Argentina, in Chile and many other South American countries, France, South Africa, Washington D.C. and Los Angeles. Roberto Burle Marx's 62-year career ended when he died June 4, 1994 two months before his 85th birthday.