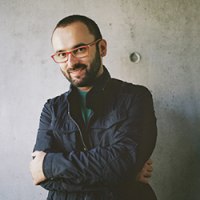 José Campos (1981) was born in Porto and graduated in architecture as well as in graphic design. But, since 2006, he has chosen a professional career as an architectural photographer. His work has been published in Portugal and all over the world, and he has collaborated with national and international magazines. He also works together with several architectural book editors in both Portugal and Europe.

At this moment, he is one of the most well known architectural photographers in Portugal. His large portfolio, that goes beyond national ground, covering countries such as France, Italy, Germany, Denmark and England, among others, can testify to that. Having close ties with the main Life Style/Architectural and Interior Design magazines, his work is frequently published in numerous international publications, and in some of the world’s most widely known websites, such as METALOCUS, Domusweb, Wallpaper Online, Frame, Archdaily, Dezeen and Designboom, among others.

His internationalization is so consolidated that in 2012 he moved to Hamburg, dividing his time now between Germany and Portugal.