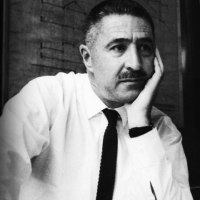 Félix Candela (1910-1997) one of the most prolific architects of the 20th century in his advanced geometric designs and lasting influence in contemporary architecture.

Born in Spain, Candela exiled to Mexico at the end of the Spanish Civil War in 1939, where he lived for thirty years and established his career as an architect. In the 1950s, ten years into his practice in Mexico, Candela debuted his experimental signature shell structures by designing a continuous curved surface of minimal thickness. His designs evolved as feats of architectural engineering, using hyperbolic paraboloid geometry to create numerous reinforced concrete shells. These curved and cantilevered forms were not only structural advancements but also brought new textural and atmospheric qualities to the social and communal spaces they shelter. Famous Candela structures include the Pavilion of Cosmic Rays at UNAM, Mexico City (1951); the Chapel Lomas de Cuernavaca, Cuernavaca (1958); Los Manantiales Restaurant, Xochimilco (1958); and the Palace of Sports for the 1968 Olympic Games in Mexico City.