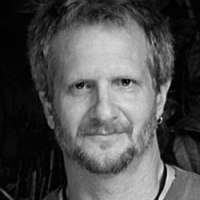 Cantley attempts to blur the undefined zone between architecture and its representation. In 1992, Bryan Cantley established Form:uLA, a practice that explores the boundaries of architecture, representation and the role of drawing, within the discourse of visionary space. He filters this research through his conceptual framework of ‘Mechudzu,’ a system that incorporates biomorphic behavior of mechanistic entities. Drawing from architecture, graphic and industrial design, music theory/notation and applications of kinesiology, Cantley merges these into a voice of undefined chronologies and place, asking the viewer + occupant to question not only where they are, but when…

He has lectured at a number of architecture schools internationally, including the LA Forum for Architecture + Urban Design. He has been visiting faculty at SCI-ARC and Woodbury, and conducted a graduate architectural drawing seminar at The Bartlett in 2008.

The San Francisco Museum of Modern Art purchased eleven of his models/drawings 2001 as a part of their permanent collection, and was the recipient of a Graham Foundation Grant in 2002. Cantley installed a solo exhibition, and was an International Guest Lecturer at the Bartlett School of Architecture in London 2008. He has shown work in a number of institutions, including SFMOMA and UCLA.

His work was featured in AD’s “Drawing Strength From Machinery” in 2008, and “Drawing Architecture” in 2013. His first monograph, Mechudzu, was published in 2011.