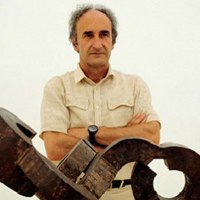 Eduardo Chillida (San Sebastián, January 10, 1924 - San Sebastián, August 19, 2002) was a Spanish sculptor and engraver known for his work in iron and concrete, outstanding continuator of the tradition of Julio González and Pablo Picasso. He initially enrolled in architecture at the University of Madrid before turning his attention to drawing which he studied at Círculo de Bellas Artes in Madrid.

Chillida’s early interest in architecture was to have a lasting impact on his development as an artist, his understanding of spatial relationships and, in particular, his interest in making space visible through a consideration of the forms surrounding it. 1950 also marks the artist’s first exhibition, Les mains éblouis, at Galerie Maeght and the beginning of Chillida’s longlife relationship with friend and gallerist, Aimé Maeght.

Chillida is highly celebrated for his approach to monumental public sculpture and his first major commission came early in his career when, in 1954, he produced the four doors for the Sanctuary of Our Lady of Arantzazu. Another key public commission, a monument to Sir Alexander Fleming, for San Sebastián was finally not installed.

1958 saw several key presentations for Chillida who represented Spain at the Venice Biennale, receiving
the International Grand Prize for Sculpture, the first of numerous awards and public recognitions in his career. He also exhibited for the first time at the Guggenheim in the exhibition ‘Sculpture and Drawings from Seven Sculptors’. At this time, Chillida began a series of sculptures entitled Rumor de Límites (Rumour of Limits). Hewn in iron and steel, they feature geometric components morphed into gravity-defying structures and are at once sculptural and architectural. These totems have their origins in drawing: alongside the Ikaraundi (Great Trembling) series of 1957, this body of work emerged from gestural, minimal, abstract drawings that Chillida produced in the mid-1950s.

The early 1960s was a period of exploration for Chillida who travelled extensively to Greece, Umbria, Tuscany, Rome and Provence. A resulting enduring interest in the interaction between light and architecture led Chillida to begin to work with alabaster, a material which appealed to the artist due to its glowing, translucent properties. The first work he produced in this material was Homenaje a Kandinsky (Hommage to Kandinsky) (1965).

In 1968 Chillida met the German philosopher Martin Heidegger and, the following year, collaborated with him on an illustrated version of his text, Die Kunst Und Der Raum. Both conceived of space as a material medium of relational contact and understood sculpture as a means of revealing how we belong in the world and this consideration of site was central to Chillida’s monumental public sculptures.

A landmark commission for the artist was his Peine del Viento (The Comb of the Wind) which was installed in 1976 in San Sebastián, his birthplace. The work rises above the waves at the western end of La Concha Bay and consists of three steel elements each weighing 11 tonnes embedded in the rocks. Chillida conceived of this work in relation to the horizon and water, two elements which he returned
to throughout his career.

Of the many public commissions, other ground-breaking projects include his collaboration with architect Luis Peña Ganchegui to create the main square at Vitoria-Gasteiz, and his 1988 monument in Guernica. In 1987 the city of Barcelona commissioned Elogio del agua (Eulogy to Water) for the Parque de la Creueta del Coll.