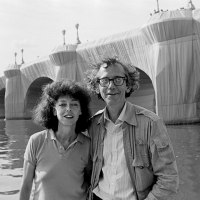 After studying at the Fine Arts Academy in Sofia, Christo decided to leave communist Bulgaria in 1957 and settled in Paris in 1958, attracted to the city’s aura and its dynamic art scene. A few months after his arrival, he met Jeanne-Claude, the adopted daughter of French General Jacques de Guillebon. They began their collaboration in 1961 and settled in New York in 1964.

The seven-year period spent in Paris (1958-1964) is essential for Christo. This intense period of creation appears today as fundamental in his artistic gesture. In 1961, Christo and Jeanne-Claude start to conceive interventions at the city’s scale, from the Iron Curtain project, rue Visconti realized in 1962 to the Pont-Neuf Wrapped, which took ten years to realize from 1975 to 1985.

Their work is represented in museums and galleries worldwide, including the MoMA, the Guggenheim Museum and the Metropolitan Museum in New York, the Tate Gallery in London and the Centre Pompidou in Paris.