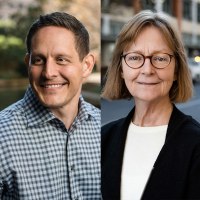 Clayton & Little is an interdisciplinary design firm based in Austin and San Antonio, Texas. Emily Little founded her Austin firm in 1983 with a commitment to making good design accessible and attainable, and an interest in the adaptive reuse of historic structures. Paul Clayton joined Emily’s firm in 2001 and together, they evolved the practice. In 2005, Paul acquired Emily’s firm and continues to lead it today with partners, directors, and design leads across a range of disciplines.

In 2015, the firm expanded from Austin to San Antonio after completing several high-profile projects in the Alamo City. The second office joins more than 30 architects and designers with a long history of working together in the two cities while broadening the firm’s range of services to incorporate architecture, interior design, experience design, brand and identity. The beneficial exchange of ideas across the region has impacted locations outside of Texas; recent expansion includes projects in California, Hawaii, Maryland and beyond.

Paul Clayton. Born the son of a mechanic in Amarillo Texas, Paul has a calm manner, keen business sense, and pragmatic approach that builds on his natural talent for architecture and devotion to sculptural form. Educated in architecture and business, Paul joined Emily Little Architects in 2001. Almost immediately, Paul began pushing the firm to expand its capabilities, maintain its established strengths, and add to them with innovative design and larger projects. Over the next several years, Paul fortified the firm’s core capability with a mix of hospitality, restaurant, and other commercial work. In 2005, he bought Emily’s firm and has led it since. Paul is committed to high impact work that endures. He responds to each project according to its needs, with an ability to realize detailed spaces that are inspirational, true, and always considerate of the people who will experience them. His ability to create symbiosis between client, staff, contractor, and design allows Clayton & Little to expand the scope of their work while reinforcing the firm’s legacy of thoughtful, responsive architecture.

Emily Little has provided leadership in the preservation and design community in her native Austin for over thirty years. With an emphasis on the adaptive reuse of historic structures, her work has indelibly colored the fabric of Central Texas. Elected a Fellow in the American Institute of Architects in 2009, Emily has also led award-winning community based art projects that have garnered national attention. She was inducted into the Austin Arts Hall of Fame in 2007. A cultural anthropologist at heart, she has built her career on making good design accessible and attainable, often by finding the small gestures that largely improve the quality of a space. Today, Emily continues to work on a limited basis on specific projects. Emily Little