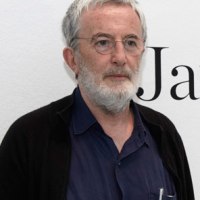 James Coleman currently lives and works in his native Ireland. He studied in Dublin (National College of Art and Design and University College). Later on he was at the École de Beaux Arts de Paris and the Accademia di Belle Arti in Milan. Before moving to Milan, where he developed his artistic career for twenty years, he worked in London and Paris. In 1973 he represented Ireland at the Paris Biennale. He has also participated in different Documenta: IX (1992), X (1997), XI (2002) and XII (2007). His work can be found in important collections such as the Irish Museum of Modern Art in Dublin, the Ludwig Museum in Cologne, the Stedelijk Museum voor Actuele Kunst in Gant, or the Musée Nationale d’Art Moderne in Paris. Recently, three of his works have been incorporated to the Museo Reina Sofía’s collection.