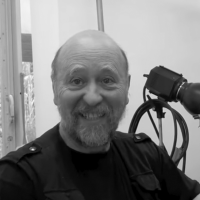 Philippe De Gobert was born in Brussels in 1946 into a family of artists. After studying the classics, although in a somewhat chaotic fashion, he turns his attention to photography, learning the technique in advertising studios. At the same time, starting in 1967, he embarks on a career as a sculptor, showing his work regularly in galleries. In 1978 he begins the series Artists’ Rooms, the subject of a solo exhibition at the Palais des Beaux-Arts. These sculptures-models are subsequently exhibited in several European cities, in both art galleries and prestigious institutions.

In 1995, the Centre d’art Contemporain in Brussels presents the first photographic prints of De Gobert's studios together with several models.

1998 marks the beginning of the artist's collaboration with the Galerie Aline Vidal, leading to a string of solo exhibitions in the Paris gallery (1998, 2001, 2004, 2008 and 2011), as well as exhibits at international art fairs such as FIAC (1999) and Paris-Photo (2017 et 2019), and contributes to the retrospective exhibition at the Musée des Arts Contemporains du Grand-Hornu in 2017, entitled De toutes pièces.