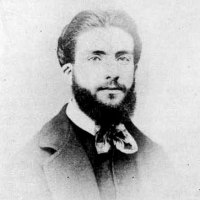 Joaquín de Rucoba lived in Madrid since he was a child, where he studied at the San Isidro Institute, to enter the Madrid School of Architecture in 1863, until 1869, when he obtained his degree, issued on March 22 of that year, being number two in his class.

After spending the 1869-1870 academic year in Vergara (Guipúzcoa) as a teacher at the Escuela de Maestros de Obras in that town, he married Clementina Alvarado Herrería. That same year, 1870, he left for Malaga where he worked as Municipal Architect of this city from 1870 to 1883. There he built, among other works, the "La Malagueta" Bullring and the Alfonso XII Market or "Las Atarazanas".

From 1883 to 1893 he lived in Bilbao, where for the first three years he was Chief Architect of the Municipal Works section, a post from which he resigned in 1886 to devote himself to the practice of his profession. The most important projects of this period were the new City Hall and the Arriaga Theater.

After a period in Madrid from 1893 to 1896, where he designed the "Beti-Jai" fronton as his most interesting work, he returned to Malaga, whose climate had always been beneficial to his health, and completed in this city numerous large-scale urban planning projects begun years earlier, among them the Calle Larios.

Joaquín Rucoba died in 1919, on April 18; his remains rest in the Hermitage of Santa Ana de Tarrueza, inherited from his mountain ancestors, and which he would restore, converting it into a family pantheon in 1891.