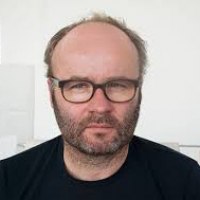 Thomas Demand studied with the sculptor Fritz Schwegler, who encouraged him to explore the expressive possibilities of architectural models at the Kunstakademie Düsseldorf, where Bernd and Hilla Becher had recently taught photographers such as Andreas Gursky, Thomas Struth, and Candida Höfer. Like those artists, Demand makes mural-scale photographs, but instead of finding his subject matter in landscapes, buildings, and crowds, he uses paper and cardboard to reconstruct scenes he finds in images taken from various media sources. Once he has photographed his re-created environments—always devoid of figures but often displaying evidence of recent human activity—Demand destroys his models, further complicating the relationship between reproduction and original that his photography investigates.

Demand (born 1964) has been the subject of one-person exhibitions at The Museum of Modern Art, New York, and the Neue Nationalgalerie, Berlin, and he has represented Germany at the Venice Biennale and the Bienal de São Paulo. Demand is currently based in Los Angeles.