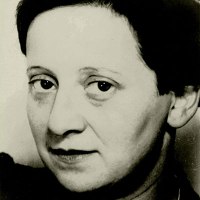 Friedl Dicker (Vienna, July 30, 1898-Auschwitz, October 9, 1944). She began her studies in 1914 in photography and printing techniques at the Graphic Arts Research Institute. The following year, she became interested in the textile world entering the Faculty of textiles of the Royal School of Applied Arts in Vienna. In 1916 she entered the private art school of Johannes Itten, who will be one of the protagonists of the future Bauhaus.

Three years later, she entered the Bauhaus school in Weimar where she continued his apprenticeship. There she carried out works of textile design, binding and participated in typography workshops. She designed the costumes and sets for important plays like "The Merchant of Venice" by William Shakespeare.

After finishing his studies in 1923, she founded the Werkstätten Bildender Kunst or "Workshops of Visual Arts" in Berlin together with Franz Singer, former partner of the Bauhaus.

In 1926 she returned to her hometown, Vienna, and there she founded a new studio, the Singer & Dicker, together with Franz Singer. Despite not having obtained any degree of architecture, in the new studio they developed building projects, interior design and furniture, with which they won several awards.

In 1931, the Singer & Dicker studio fell apart and they began their solo careers. Friedl Dicker began to practice as an educator in Vienna and joined the anti-fascist movement. In 1934, she was arrested for developing activities related to communism.

After being released. She moved to Prague where Nazism was at its peak, something that would change the course of Friedl's life. She started with her textile works at the Spiegler & Sons factory and she, as a designer, received the award at the Vystava 38 Nachod exhibition.

In 1942, she received an order of deportation and in that same year she was transferred to Terezín, a town in the Czech Republic known for the concentration camp installed during her term during the Second World War and in 1944 she was deported. Finally, Frield died at the age of 46, the Auschwitz concentration camp.