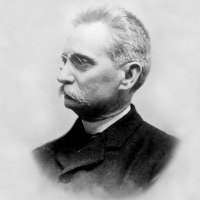 Lluís Domènech i Montaner. (December 21, 1850 – December 27, 1923) was a Spanish architect who was highly influential on Modernism, similar to Arts and Crafts, Art Nouveau or Jugendstil movements.

Born in Barcelona, he initially studied physics and natural sciences, but soon switched to architecture. He was registered as an architect in Barcelona in 1873. He also held a 45-year tenure as a professor and director at the Escola d'Arquitectura, Barcelona's school of architecture, and wrote extensively on architecture in essays, technical books and articles in newspapers and journals.

His most famous buildings, the Hospital de Sant Pau and Palau de la Música Catalana in Barcelona, have been collectively designated as a UNESCO World Heritage Site.

As an architect, 45-year professor of architecture and prolific writer on architecture, Domènech i Montaner played an important role in defining the Modernisme arquitectonic. This style has become internationally renowned, mainly by Antoni Gaudí works.

His buildings displayed a mixture between rationalism and fabulous ornamentation inspired by Spanish-Arabic architecture, and followed the curvilinear design typical of Art Nouveau. In the El castell dels 3 dragons restaurant in Barcelona (built for the World's Fair in 1888), which was for many years the Zoological Museum, he applied very advanced solutions (a visible iron structure and ceramics). He later developed this style further in other buildings, such as the Palau de la Música in Barcelona (1908), where he made extensive use of mosaic, ceramics and stained glass, the Hospital de Sant Pau in Barcelona, and the Institut Pere Mata in Reus.

Domènech i Montaner's work evolved towards more open structures and lighter materials, evident in the Palau de la Música. Other architects, like Gaudí, tended to move in the opposite direction.

He died in Barcelona in 1923 and was buried in the Sant Gervasi Cemetery in that city.