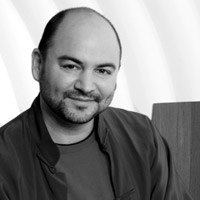 Craig Edward Dykers was born in Frankfurt, Germany, in 1961 and has lived extensively in both Europe and North America. He received a bachelor's degree in architecture at the University of Texas at Austin after initial studies in medicine and art. He worked in Texas and California before cofounding Snøhetta with Kjetil Thorsen in 1989.

Active professionally and academically, Dykers is a member of the Norwegian Architecture Association (NAL) and the American Institute of Architects (AIA);  a fellow of the Royal Society of Arts in England; and vice president of the Norwegian American Chamber of Commerce. He has been the diploma adjudicator at the Architectural College in Oslo and a distinguished professor at City College of New York City, Syracuse University, and Cornell University. He has lectured extensively in Europe, Asia, and the Americas. In addition, Dykers has been commissioned to complete various public installation art projects, often focused on notions of context, nature, and human nature.