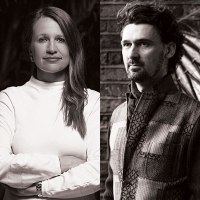 ecoLogicStudio is an architectural and urban design practice dedicated to bio-digital design for the definition of a new “ecology” of space and behavior. Founded in London in 2005 by Claudia Pasquero and Marco Poletto, the office has earned an international reputation for its innovative work on “systemic” design –,a method defined by the combination and integration of systemic thinking, computational design, biotechnology and prototyping.

Claudia Pasquero is an architect, urban designer and ecologist. Her work and research operate at the intersection of biology computation and urban design. She is Co-founder and Director of ecoLogicStudio, Director of the Urban Morphogenesis Lab at The Bartlett UCL in London, Senior Tutor at the IAAC in Barcelona and ADAPT-r RMIT Research Fellow at the Estonian Academy of Arts in Tallinn. In 2016, Claudia was appointed Head Curator of the Tallinn Architecture Biennale 2017 entitled “bioTallinn”.

She was also included in the top 10 of the Wired Smart List 2017, which selects and recognizes rising stars in global innovation. After graduating from Turin Polytechnic in Italy, Claudia worked as an on-site architect during phase three of the RPBW Lingotto project in Turin, and on a research project for the set-up of an Urban Air Quality Lab with Turin Polytechnic and Environmental Park. Claudia moved to London in 2001 to study at the Architectural Association. She worked with Chora, Ushida Findlay Architects and Erick Van Egeraat Architects before cofounding ecoLogicStudio with Marco Poletto in 2005. She is co-author of “Systemic Architecture. Operating manual for the self-organizing city”, published by Routledge in 2012.

Marco Poletto, Co-founder and Director of ecoLogicStudio, is an architect, author and educator. He is currently an ADAPT-r RMIT research fellow at the Aarhus School of Architecture and Distinguished
Visiting Critic at the Carnegie Mellon University in Pittsburgh. Over the past few years, Marco has been Unit Master at the Architectural Association in London, Senior Tutor at the IAAC in Barcelona, Visiting Critic at
the Cornell University, and Research Cluster Leader at The Bartlett UCL in London. After graduating with Honors from Turin Polytechnic in Italy, Marco moved to London to study at the
Architectural Association. He worked in London as an environmental designer with Battle McCarthy before
co-founding ecoLogicStudio in 2005.

His projects have been widely published and exhibited throughout the world: in Orleans (9th Archilab - FRAC Collection, 2014), in Paris (EDF Foundation, 2013), at the Venice Architecture Biennale (STEMv3.0 the
lagoon experiment, 2008; The Ecological Footprint Grotto, 2010; Solana Open Aviary, 2016), at the Seville Art Biennale (STEMcloud, 2008), in Istanbul (Fibrous Room, 2008) and at the Milan Design Week (Urban Algae Farm, 2014; Aqua Garden, 2007) and Milan EXPO 2015. He is co-author of “Systemic Architecture. Operating manual for the self-organizing city”, published by Routledge in 2012.