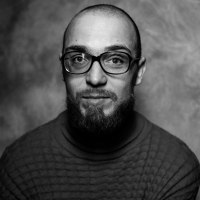 Denis Esakov. Denis is a contemporary artist and architectural photographer. He describe the world through architecture and through patterns. Sorting the urban landscape into buildings, parks, squares, streets, and transport communications, you are looking for a place that you can identify as yours. Photography conveys this understanding of space to the viewer.
​
Denis was born and lived him youth in Kyrgyzstan, Central Asia. He was taken by the desire to feel the rhythms of a big city through movies and books. He moved to Moscow and became fond of exploring the city and its architecture through photography. Photography became a point of him life. His next love is Berlin. This city draws him with its environment, architectural findings and atmosphere. Denis are dedicating the next few years of him life to it.