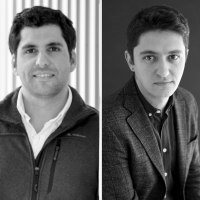 (right) Javier Fernández Contreras. (1982) is an architect, professor and director of the Department of Interior Architecture in HEAD-Genève, Switzerland. The Department explores the role of interior spaces in the construction of contemporary cities and societies, offering Bachelor and Master programs that promote speculation and direct action on contemporary design and space through regular collaborations with international companies and organizations. .

Contreras studied Architecture at the Technological University of Delft (TU Delft) and at the Higher Technical School of Architecture of Madrid (ETSAM), where he graduated –Arquitecto, 2006; Doctor, 2013, summa cum laude. In 2015 he was a finalist in the 10 arquia / thesis contest with his doctoral thesis The Miralles Plant: Thought and Representation in the architecture of Enric Miralles. Contreras has taught Architectural Projects in different institutions, including ETSAM in Spain, XJTLU in China and ETH Zurich in Switzerland, and since 2018 directs Interior Architecture at HEAD-Genève. He is the author of the books Fragments of Plant and Space (Asymmetric Editions, 2019) and The Miralles Projection (Gold Editions, 2020). His critical essays have been published in different books and specialized media, including Massilia Annuaire des Études Corbuséennes, Yearbook Massilia de Corbusianos Studies, Marie-Joese van Hee architecten, Perspectives in Metropolitan Research, Princeton 306090, CIRCO, Drawing Matter, Logbook, RA Architecture Magazine.

At HEAD-Genève, recent awards include the Swiss Design Prize 2019 nomination with the #Looslab project, the selection of the False Space project for the Lisbon Architecture Triennial 2019 and the selection of the Cité Radieuse Manifeste du Sud project for Manifesta Marseille 2020. In 2019, Contreras, together with Youri Kravtchenko, curated the Scènes de Nuit exhibition at the f'ar Lausanne (with Manon Portera and the Bachelor students in Interior Architecture, HEAD-Genève).

(left) Ignacio Hornillos Cárdenas. (Madrid, 1985). Architect in 2010 from E.T.S.A.M with a rating of outstanding in the PFC. He has studied at the Higher Technical School of Architecture in Seville (2003-2004), at the Illinois Institute of Technology in Chicago (2007-2008) and at Domus Academy in Milan (2011). In 2012 he graduated with the Master of Advanced Architectural Projects in the line of theory and criticism from the Polytechnic University of Madrid where he was a mentor professor in the Teaching Unit of José Manuel López-Peláez and in charge of the edition of the book “Social space , Market and Habitat in Casablanca ”. From 2012 to 2016 he lives in Chile where he was a professor of the Faculty of Design and associate professor of the Faculty of Architecture of the University of Development at its headquarters in Santiago, Chile. He is currently developing his doctoral thesis in the Projects department of the E.T.S.A.M, entitled “The Harmonic Metacrisis. Juan Borchers in Madrid, 1948-1954 / 1970-1971 ”under the direction of Jesús Bermejo and Federico Soriano. He has been a guest researcher at the Pontifical Catholic University of Chile where he obtains the international stay under the supervision of Fernando Pérez de Oyarzun. He has published research articles at the Critic-All Congresses in Madrid in 2015 and 2016 and published a scientific article in the research magazine RITA 10 in its November 2018 issue.

At a particular and collective level, he has exhibited in Chicago, Madrid, Valencia, Milan, Venice and Santiago de Chile, obtaining different awards such as recognition by Casa Bella magazine (832) as one of the most outstanding “under 30” architects at the level world. She has been a finalist with the “Casa de la Capilla” at the AR architectural awards in 2019. Selected by Arquia Próxima in 2017, finalist of the Ibero-American Design Biennial in 2014, finalist of the Chile design awards in 2013, prize for the Art Foundation and Law in 2011 and selected by Fresh Product at the Matadero plant for 3 consecutive years. His work has been published on different design and architecture platforms both nationally and internationally.