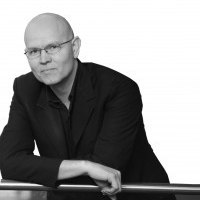 Jason Flanagan is the design director of the practice and leads teams on a diverse range of projects including rural and urban masterplans, hotels and spas, residential projects such as individual houses and apartment buildings and performing arts centres and sound shells.

Jason has an extensive track record of working on public buildings for the performing arts, most recently leading the team on the competition-winning scheme for the Royal Welsh College of Music & Drama in Cardiff which comprises a concert call, theatre and gallery space.

Jason studied architecture at the Bartlett School of Architecture at London University and at the Royal College of Art. During his studies he worked for Conran Roche Ltd and Armstrong Associates. He joined Foster + Partners in 1991 and in 1995 Jason was made Associate, delivering designs for a 3,000-seat conference centre at the Scottish Exhibition and Conference Centre in Glasgow. In 1997 he became Project Director for the Sage in Gateshead, a music centre comprising two performance spaces, a rehearsal hall and a music school. He was made Partner at Foster + Partners in 2004.

Jason has a special interest in acoustics and sound. Amongst his most innovative projects is Soundforms, the first-ever mobile acoustic shell with the capacity for a full orchestra. This modular structure not only shelters performers, but allows musicians to hear themselves and projects sound to the audience.