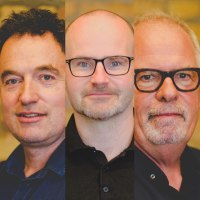 Foster Wilson Size is a leading English architectural practice founded by Edmund Wilson and Tim Foster with an international reputation for the design of cultural buildings and creative spaces. The practice’s experience includes projects for private clients, developers, theatre owners and operators, universities, schools and local authorities, and our work often involves the sensitive repair and alteration of historic buildings. Recently completed projects in the capital include the restoration of the much-loved art deco Trafalgar Theatre in the West End and the redevelopment of the Polka Children’s Theatre in Wimbledon.

Edmund Wilson studied architecture at Cambridge University and qualified at the Bartlett School of Architecture. Before co-founding Foster Wilson Size, Edmund worked on a number of large scale public arts projects including a new concert hall for the Pro Corda music school in Suffolk, a new library and lecture theatre for the Institute of Child Health, as well as cafes at the Royal Festival Hall and the Hayward Gallery, for ORMS architects. While at CZWG Architects he was project architect for a new mixed use waterfront building in Rotherhithe.

He has been responsible for the design of a wide range of projects undertaken by Foster Wilson Size. Recently Edmund has been responsible for the new St James Theatre in Central London as well as the renovation of the Hammersmith Eventim Apollo and Hoxton Hall, a Grade II* listed music hall in East London. Edmund has lectured and taught widely and is currently a teaching fellow at the University of Cambridge department of Architecture. He is also co-editor of Block, a new magazine for writing on architecture, built space and the city.

Tim Foster was the founding partner in Foster Wilson Architects (formerly Tim Foster Architects) and now acts as a consultant to the practice. He trained at the Cambridge University School of Architecture, where he also worked as a stage designer. Before establishing the practice in 1979, he worked for Roderick Ham and Partners and as consultant architect to Theatre Projects Consultants.

Tim has been responsible for many theatre projects carried out by the practice including the Tricycle Theatre and Cinema, the Salisbury Playhouse Redevelopment, the Trafalgar Studios, the Broadway Theatre in Barking, the redevelopment of The Theatre Royal Norwich, the Yaa Centre in West London, the restoration of the Everyman Theatre in Cheltenham and St James Theatre, London (now The Other Palace). Educational projects include the Parabola Arts Centre for Cheltenham Ladies’ College, the Caryl Churchill Theatre at Royal Holloway University and the Quarry Theatre at St Luke’s for Bedford School. Current projects include the remodelling of Polka Theatre and proposals for the Petersfield Festival Hall, Tiverton Community Arts Theatre and the Sacred Heart High school in Hammersmith.

Tim was chair of the editorial board and a contributor to Theatre Buildings: A Design Guide, published by Routledge in 2010 and currently is leading the preparation of a revised edition. He has been an Arts Council Lottery assessor in England and Scotland, is chairman of the ABTT Theatre Planning Committee and was chair of the OISTAT Architecture Commission from 2014 to 2020. In 2019 he was an international jury member for the Prague Quadrennial. He was elected a Fellow of the ABTT in 2012 and was a board member of the Tricycle Theatre Company from 2000 to 2013. From 2009 to 2015 he was appointed by The Secretary of State to serve as a trustee of The Theatres Trust, the national advisory public body for theatres in the UK.

Jonathan Size is a partner at Foster Wilson Size. He trained at the University of Bath for his BSc and Masters degrees, which included a placement at the Bordeaux School of Architecture. He completed his Part 3 Diploma at the Bartlett in London. Before joining Foster Wilson Size Jonathan honed his skills at DesignLSM Interior Design, Allies and Morrison Architects, Poole Phillips Associates, Bolton Lomas Bradshaw and Stubbs Rich Architects. At Foster Wilson Size Jonathan has worked on a wide range of projects, most recently the refurbishments of the Grade II* Hammersmith Eventim Apollo (phases 1 – 7) and Grade II Barbican concert hall and dressing rooms.

In addition, Jonathan has completed work at the Everyman Theatre Cheltenham, Norwich Theatre Royal, Salisbury Playhouse, Broadway Theatre Barking, Trafalgar Studios, Yaa and The Tabernacle arts centres and the St James Theatre, as well as numerous new bars and interiors at many West End theatres. His residential works include a private house in Greenwood Road, Hackney, a studio in Kelvedon, Braintree and apartments in Ferdinand Place, Camden. Recently Jonathan has been responsible for the Reading Gaol feasibility and Grade II Mayflower Theatre, Southampton refurbishment.