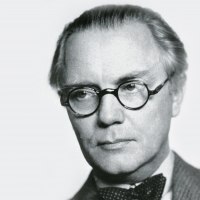 Eric Gunnar Asplund was born in Stockholm in 1885. He studied at the Higher Technical School and then at the Academy of Art, graduating in 1909. That same year he entered an architectural competition for the Swedish Church in Paris, basing his design on architecture traditional of your country. He also used this approach in two competitions for schools, one in Karlshmn in 1912 and another in Hedemora, 1913. That same year he entered the competition for the extension of the Göteborg City Hall, the latter winning.

Asplund visited the United States to research library design to put together a program for competition in Sweden. His research so impressed the Stockholm Municipal Library Committee that the competition was not held, inviting him to present his project in 1921, the building was completed in 1928. Its architecture went through a process of ornamental simplification that little by little it approximated the schemes of the modern movement. Until reaching his brief rationalist period (1928-1933), his work is strongly influenced by the French neoclassicists, the Austrian Josef Hoffman, and mainly by Bindesboll with his Thorwaldsen Museum in Copenhagen (1948).

The Stockholm Exhibition of 1930 not only establishes modern architecture in Sweden but recognizes Asplund as the leader of a group of young architects within the Arts and Crafts Society. Four years later he was commissioned to expand the Göteborg Town Hall which he had won in 1913. In total, Asplund designed 68 projects, of which 32 were built. He died on October 20, 1940, in Stockholm and became known for depicting the Swedish neoclassical architecture of the 1920s.