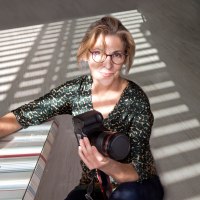 María José Gurbindo, studied architecture at the University of Navarra and, as she likes to say, works as an architect from the field of the image.

In 1995, she moved to Barcelona where she specialized in 3D architectural imaging, a field of representation that started then and that allowed her to work from his studio for important studios and promoters.

Fifteen years later, she begins her career as a photographer and bets on the potential of the real against the invented reality.

As an architecture photographer, she combines her most commercial work with carrying out personal projects.