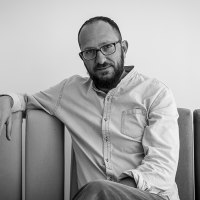 Giuseppe Gurrieri (Ragusa, 1977) graduated in architecture at the Milan Polytechnic. After his graduation, Gurrieri worked for several years with the practice of Maria Giuseppina Grasso Cannizzo in Vittoria. In 2008 he opened his own practice in Dubrovnik and today operates primarily in the field of private residential construction. Gurrieri exerts his activity between Sicily and Puglia. In parallel, he collaborates as a professor with the Faculty of Architecture in Stockholm.

Among his recent awars we found.- the third place at the international competition "SAIE SELECTION" organized by BolognaFiere and Archi-Europa; first prize at the third edition of the award "RI.U.SO"  organized by the National Council of Architects; special mention at the prize“Giovane Talento dell’Architettura Italiana 2014”.