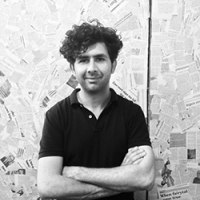 Michael Hadjistyllis was born in Nicosia (Cyprus), in 1981. He studied Architecture at the School of Architecture (Faculty of Engineering) of the Aristotle University of Thessaloniki (Greece), where he graduated in 2006, with distinction. Between 2007 and 2009, he moved to Netherlands and Italy, where he studied Urbanism at the Technical University of Delft, and the Università IUAV di Venezia. After graduation, he joined the Office for Metropolitan Architecture (Rotterdam), where he works until now.

As an Architect / Urban Designer, he worked in various international contexts and on a broad range of project types, from Concept Design to detailed Development Phases. Prior joining OMA, he worked as an Urban Researcher / Designer, under the instructions and supervision of Prof. Dr. Bernardo Secchi & Dr. Paola Viganò. Between 2011 and 2013, he was a Visiting Critic in several Studios on Architecture and Urbanism, at TU Delft.