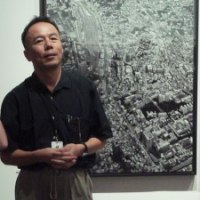 Naoya Hatakeyama. Born in Rikuzentakata, Iwate Prefecture in 1958. Studied with Kiyoji Otsuji in the School of Art and Design at the University of Tsukuba. Completed a master's course at the same university in 1984. Since that time, Hatakeyama has been based in Tokyo, producing series of works that are concerned with people's involvement with nature, the city, and photography. He has participated in numerous solo and group exhibitions both in Japan and abroad. In 2001, he showed his work in the Japan Pavilion at the Venice Biennale along with Masato Nakamura and Yukio Fujimoto (commissioner: Eriko Osaka). An exhibition called Natural Stories, which includes scenes of his hometown of Rikuzentakata following its destruction in the tsunami earlier this year, is currently on view at the Tokyo Metropolitan Museum of Photography (until Dec. 4).