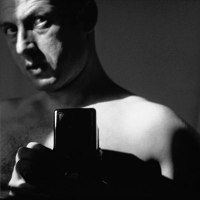 Lucien Hervé.- (1910 - 2007) Of Hungarian origin, László Elkán arrived in Paris in 1929. First attracted by painting, music and fashion, he began photographing in 1938 for Marianne magazine. From 1940, after his escape from the prison camp of Hohenstein, the ranks of the Resistance and the National Movement of prisoners of war and deportees, he is known under the pseudonym of Lucien Hervé.

Close to the French humanist school after the war, his career took a decisive turn after his meeting with Le Corbusier in 1949, becoming his photographer until his death. In 1965, he collaborated with the architects Alvar Aalto and Oscar Niemeyer, and is known for his beautiful images of Chandigarh, Brasilia or Thoronet.

He also photographs the great Parisian sites, from the UNESCO headquarters to the Louvre pyramid. Among his last photographs are those of his Parisian apartment. During his sixty-year career, he has had numerous publications and exhibitions in galleries and museums around the world.