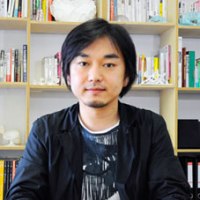 Akihisa Hirata. Born in Osaka Prefecture in 1971. Graduated from the Department of Architecture in the Faculty of Engineering at Kyoto University in 1994. Completed a master's course at the same university in 1997. After working at Toyo Ito & Associates, he established the Akihisa Hirata Architecture Office in 2005. At present, he is a specially-appointed associate professor at Tohoku University, and a part-time lecturer at Kyoto University, the University of Tokyo, and UCLA. Among the many honors he has received are SD Review's Asakura Award (2004), and the 19th JIA Newcomer's Award (2008). His important works include masuya (2005) and alp (2008). His published works include Contemporary Architect's Concept Series 8: Tangling (INAX, 2011).