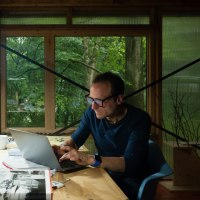 Invisible Studio is an innovative and award-winning architecture practice founded by Dr Piers Taylor. Taylor is a Chartered Architect, was the inaugural Studio Master at the Architectural Association for the Design & Make Programme at Hooke Park, a former Design Fellow at the University of Cambridge, an external examiner at the Arts University, Bournemouth and the Convenor of Studio in the Woods. Taylor was also a PhD candidate at the University of Reading and received their anniversary scholarship funding for his Doctoral research.

Invisible Studio aims to be a different organisation from conventional practice. They work internationally and very locally, in a variety of fields and at a variety of scales. They operate from a self-built studio located in a working woodland which they also manage as an ongoing forest enterprise alongside practice, and have pioneered a number of academic programmes that rethink the relationship between design and making.

With each project, we aim to realise something extraordinary. They are interested in going about the process of architecture in a different way – a way where clients, users, collaborators and makers are all part of the process of design, and sometimes construction.

Their work encompasses a number of seminal buildings from ecologically sensitive self builds through to schools, community and public buildings including the new project at East Quay Watchet and large-scale urban environments. Their work has been published widely and internationally and has won a plethora of awards including a number of RIBA National, Regional and Sustainability Awards, Wood Awards, WAN Awards, the AJ Small Projects Award and has been shortlisted for the Stephen Lawrence Prize.

In terms of technology, they prefer to use passive principles to aid building performance and use these principles to define the premise of a building.