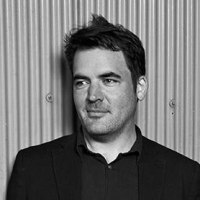 Sam Jacob Studio for architecture and design was established in 2014 and has quickly gained a reputation as a progressive design practice creating idiosyncratic and striking projects underwritten with intelligent thinking. Projects that spans scales from objects to architectural, urban and cultural projects. The works are driven by research developing new relationships between contemporary approaches, history and wider culture.

Clients include cultural institutions such as the Design Museum, the Science Museum and the V&A, global brands including Mini, local authorities and commercial developers.

Sam Jacob, principal of Sam Jacob Studio. Previously, Sam was a founding director of FAT Architecture where he was involved in many internationally acclaimed projects including the BBC Drama Production Village in Cardiff, the Heerlijkheid Hoogvliet park and cultural centre in Rotterdam and the curation of the British Pavilion at the 2014 Venice Biennale. He has exhibited at leading galleries and museums including the Victoria & Albert Museum in London, the MAK in Vienna and the Biennale.

Sam is also contributing editor for Icon magazine and columnist for both Art Review and Dezeen and a regular participant in talks and events for institutions such as MoMA, the Southbank Centre and the Soane Museum.