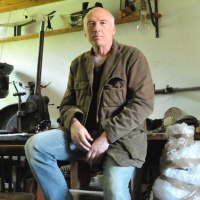 Jacek Jarnuszkiewicz, grew up among artists. His grandfather took part in the reconstruction of the Polish capital, and two of his uncles are renowned sculptors. In the sixties, his family immigrated to Canada. He studied at Concordia University and later at the université de Montréal, where he would also teach visual arts.

Since the 1990s, Jacek Jarnuszkiewicz has developed a conceptual art that, through dreamy spaces involving both real objects and sometimes utopian, sometimes archaic forms, invites us to reflect on art and culture, science and technology, the past, present and future, and more generally on the condition of Man.

Mostly known for his public art and his forays into land art, Jacek Jarnuzskiewicz has enjoyed several individuals and institutional exhibitions in Canada (Museum of Contemporary Arts, Montreal), in Poland as well as at the São Paulo Biennial.